Not too long ago I once again rediscovered my love for comics. Actually, not comics as much as graphic novels. I did, however, enjoy Injustice vs The Masters of the Universe and the Mortal Kombat X comic. I only got to issue of 26 of Preacher before I had to stop reading. The Killing Joke was amazing for being a comic which began and ended in its own single volume, but wasn’t as long as a graphic novel. I loved Kick Ass and desperately awaiting the ability to read the next installment, which I believe is issue 4. Watchmen was pretty dang good, too.

Because I am a writer I recognize what it takes to write a good story and present a great comic character. I may not be a great illustrator, but I have my own style which I find satisfying enough. With all this talent, I have been trying to get a few comics launched through DC, Marvel, and Dark Horse. I don’t know what I’m doing wrong here…no one wants my creations! Here, take a look at these ones. I’m sure once you do, you’ll demand any number of comic publishers to let me make these on a large scale.

Clicking on the images will open a new tab allowing you to view the image in full HD glory! 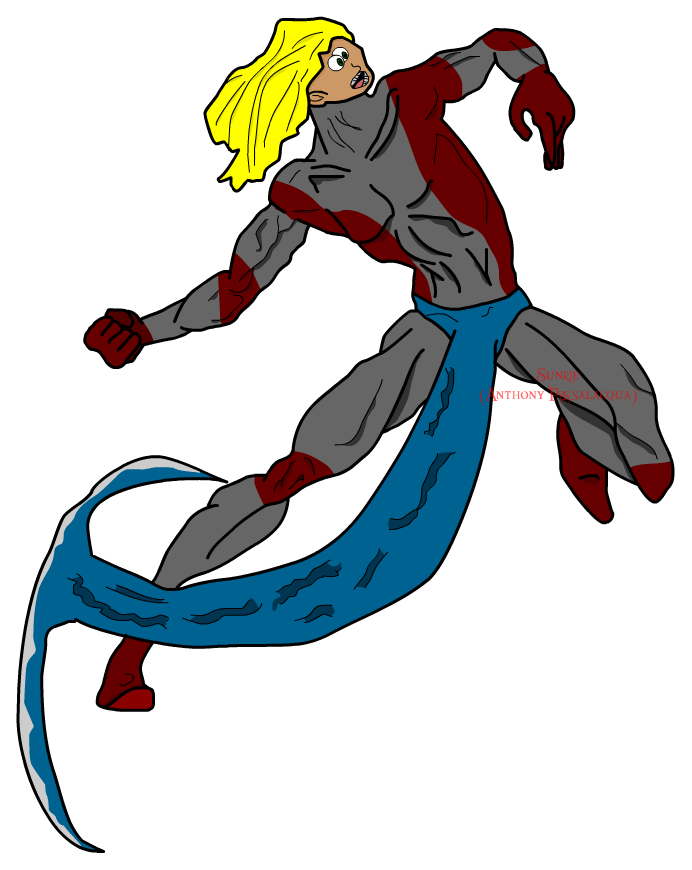 Tragedy struck the first day of his premier role, however. Several armed thugs entered into the house they were filming, demanding everyone into one room. Turns out, the director and producer owed some really seedy people some money for all the investments they made in the movies. When one of the gunmen stated they were there to collect from everyone to recuperate some of the funds or kill those who couldn’t pay something up, Liam sprang into action and so did his penis. The increased blood pressure and fury channeled straight to his dick and it immediately grew to an offensive side, as well as taking on the shape of a scythe. One gunman was instantly beheaded and the other had both his hands cut off. Liam had saved the day!

Name: Jihad Jimmy the Fabulous
Power: Immune to Suicide Bombing (Specifically, not all explosions), Immune to Sand Storms, Immune to Waterboarding
Secret Identity: Azhaan Kakazai
Nation: Pakistan
Day Job: Resident Imam
Age: 34 years old (Earth Time) / 87 years old (All Time)
Catch Phrase: “Strong. Fierce. FABULOUS! ALLAH HU-AKBAR!”
Background: Azhaan Kakazai was heading to a Jewish preschool in order to do his Islamic duty of murdering them all when his truck was struck by a meteor. Unbeknownst to him, a forbidden power was residing in this meteor. He was taken to the land between and held in meeting by the alien virus, Glugarnock. Azhaan spent fifty two years in conference with Glugarnock in which they came to an agreement which satisfied both. Glugarnock agreed to provide immunity to self inflicted explosions, all sand storms, and to be immune to waterboarding, however, Azhaan would be forced to reveal his true self to all anytime he used his powers.

Azhaan Kakazai knew this would be a death sentence, as his true self was a huge, flaming homosexual. He did everything he could to keep it a secret, as Islam forbid homosexuality upon the very real threat of death. Glugarnock promised he would provide him with the ability to continue hiding his true self until the power was about to be used. Azhaan agreed and so, Jihad Jimmy the Fabulous was born…or should we say converted.

Jihad Jimmy the Fabulous continues to fight against all infidels who will not convert to his way of thinking. The irony of being considered an infidel since he’s so obviously overtly and openly gay is completely lost to him. The only thing which matters is those who aren’t Muslim are killed, and since he can blow himself up as much as he wants, he doesn’t ever really worry about being discovered. Those who have witnessed him in action often describe a colorful blur followed by a massive explosion. He’s a true hero to the Muslim children and the most progressive super hero ever written.

Name: Pink Blackhole
Power: Creates a Singularity from her Gaping Vagina
Secret Identity: Brittany Pfifer
Nation: America
Day Job: Secretary
Age: 191/2 years old
Catch Phrase: “I have a pussy pass and I’m going to use it!” and “DOWN WITH THE PATRIARCHY!”
Background: Brittany Pfifer was a slut. That is to say she was the slut to end all sluts. The sluttiest slut to ever slut up a slut for another slut. That’s how much of a slut she was. Not to slut shame her, though, as how much a slut she was is a recorded fact. Just so everyone understands, by the time Brittany was 16 she had been with 127 different boys and men, multiple times each. Unfortunately for Brittany, by the time she turned 19 and had been with 398 different boys and men, as well as three women, two goats, and five horses, she met her 399th “man”. This man was actually Stephan Vika Dronbox from the Piscium system and wanted her for his own.

At first (the three hours they were alone together for the first day) she went along with it, but began to slut around again. Stephan Vika Dronbox was not a creature to be trifled with, and upon finding her in the bathroom of a Wendy’s fast food restaurant screwing one of the workers, her 400th, he lost all control. He killed the coworker, blew up everyone else in the Wendy’s and beamed them both to his ship in orbit.

Brittany thought it was going to be all fun and games when she was strapped down to a table, unable to move, until Stephan Vika Dronbox told her that if she felt she could never have her pussy full enough, he was going to make sure it was never full again. She didn’t know what he meant until she awoke later and went to cram a cucumber her her snatch as an appetizer. Before her very eyes, her vagina opened up into a blackhole and sucked the cucumber deep into the event horizon, never to be seen again.

Brittany has vowed to “break the patriarchy for doing this to her” and used her curse as a blessing to do so. She screams out at pro-life rallies and literally swallows mean whole into her infinitely vast cunt if they so much as ask her to dance or ask her out on a date. It’s her body, therefore her choice, so she uses her female privilege and misconception of gender equality to get what she wants. Well, that and her pink taco blackhole. 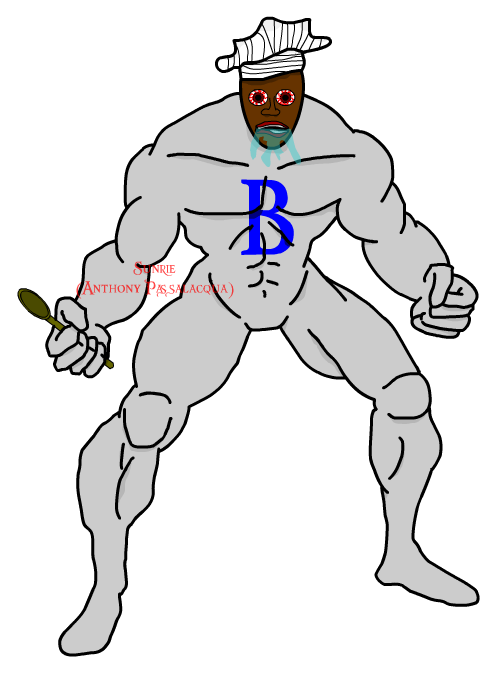 Name: Iron Baker
Power: Entire Body Turns to Iron (except head), Secretes Olive Oil from Hands and Feet, Turn Baking Tools Into Deadly Weapons
Secret Identity: Jabari Jackson
Nation: America
Day Job: Baker
Age: 24 years old
Catch Phrase: “Let’s make it a baker’s dozen!”
Background: Jabari Jackson was well on his way to making a name for himself in the Wisconsin baking world when tragedy struck. He had been promised some exotic ingredients by a supplier he had never heard of before. Jabari was extremely excited to get started using these new ingredients in order to skyrocket to first place during a baking tournament. He just knew he was going to come up with flavor profiles no one had ever tasted before.

When the ingredients arrived, he tore open the boxes and was hit in the face by multidimensional beams of light, transforming his body and filling him with black rage. His body turned hard as iron, except for his head, and he began to uncontrollably secrete olive oil from his feet and hands. The whisk and measuring spoon he was holding transformed into fearsome weapons of power. Running into the night in a fit of black rage, he took down three muggers and stopped a bank robbery.

Over time, Jabari learned to harness his powers and black rage to his advantage. It has come in handy several times during a traffic stop, preventing him from being murdered by a trigger happy police officer. He’s also able to use his fearsome weapons to churn out baked goods no one else can reproduce and has become more famous than Julia Child and Gordon Ramsay.

So, how about that?! I’m sure you agree with me it’s confusing as all get out why the big three publishers won’t touch my creations. Let’s get a petition started. With the release of Captain Marvel, you’d think they’d be all over Pink Blackhole at least!